India WHRC submitted a formal communication to the National Commission for Protection of Child Rights (NCPCR) with concerns regarding the “Inclusion of Transgender Children in School Education: Concerns and Roadmap” Training Material issued by the NCERT on 1st November, 2021.

This was in response to NCERT's (now brought down) proposal to include unscientific training material for school teachers that mentions puberty blockers, hormones and surgical interventions as solutions to "gender dysphoria" with no mention about the lifelong irreversible damages caused by said interventions to the body.

You can read the 10 page letter here. 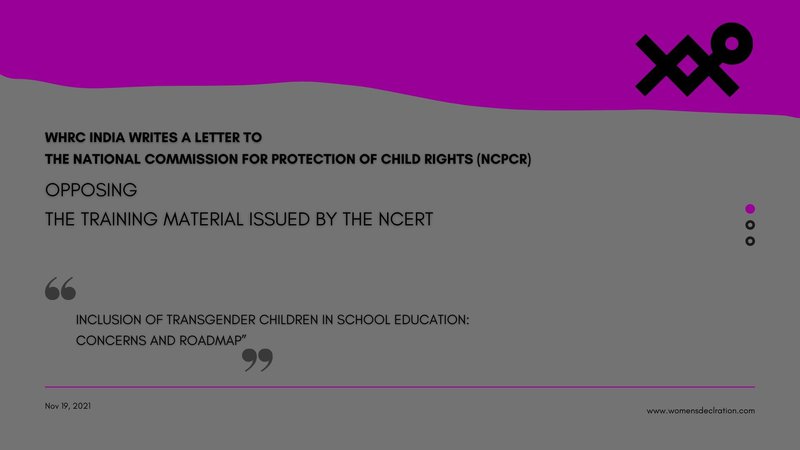 Following are the key points we touched upon:

In conclusion we wrote:

We agree that children who do not conform to sex stereotypes face exclusion and bullying. Children who are struggling to conform to the stereotypes imposed upon their sex deserve empathy and care from everyone- the State, society, parents, teachers and peers. But we do not agree that gender identity intervention offers any solution.

Gender identity further entrenches the trauma by making the child and everyone around her believe that the only way she can really live as she wants to, is by fitting into the boxes of “gender.” Identifying as “non-binary”, “agender” or “genderfluid” is antithetical to their own case because these identities rely upon the existence of a “binary” which one is trying to “identify” out of. Instead of trying to abolish it, such identities reaffirm and indoctrinate it into gullible young minds.

We insist that the NCERT take the concerns expressed by many women from around the world- academics, researchers, journalists, philosophers, filmmakers, and activists about the harms of gender identity into account. Not just for the proposed training material that has since been taken down, but for all future proposals too. It is imperative to do so to ensure the well-being of the younger generation and to protect the sex-based rights of girl children.

We will be happy to offer feedback, share our viewpoints and present a case for women’s sex-based rights going forward.

To be part of India WHRC, sign up to become a volunteer. All information can be found in the India homepage.