April 2021: Our German country contact recently wrote a letter published in the Frankfurter Allgemeine Zeitung in which she criticizes the concept of "gender identity" as being a useless social construction based on sex role stereotypes, the medicalisation of children, the role of the medical industrial complex in this and the affirmative approach and bubble language of the doctor that had written a previous article on this. The letter was a response to him. English translation below. 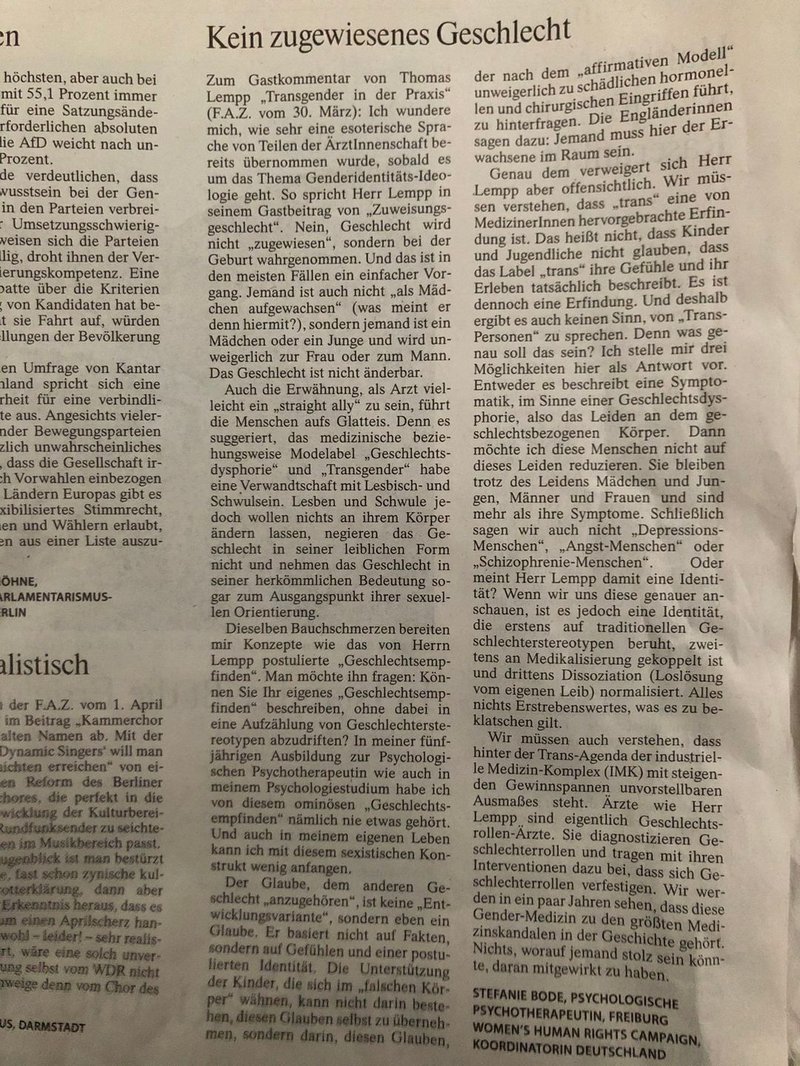 Response on the guest commentary by Thomas Lempp "Transgender in practice" (F.A.Z. of March 30): I am surprised how much esoteric language has already been adopted by parts of the medical profession as soon as it comes to the topic of gender identity ideology. For example, Mr. Lempp talks about "assigned sex" in his guest post. No, sex is not "assigned" but observed at birth. And that is a simple process in most cases. Someone is also not "raised as a girl" (what does he mean by that?), but someone is a girl or a boy and inevitably becomes a woman or a man. Sex is not changeable.

Also, the mention of perhaps being a "straight ally" as a doctor leads people up the garden path. For it suggests that the medical and fashion labels, respectively, "gender dysphoria" and "transgender" have a kinship with lesbianism and gayness. Lesbians and gays, however, do not want to have anything changed in their bodies, do not negate sex in its bodily form, and even take sex in its conventional meaning as the starting point of their sexual orientation.

The same stomach-ache causes me concepts like the "sexed feeling" postulated by Mr. Lempp. One would like to ask him: Can you describe your own "sexed sensation" without drifting into an enumeration of sex stereotypes? In my five years of training as a psychological psychotherapist as well as in my psychology studies, I never heard of this ominous "sexed sensation". And also in my own life I can do little with this sexist construct.

The belief to "belong" to the opposite sex is not a "developmental variant", but just a belief. It is not based on facts, but on feelings and a postulated identity. Support for children who believe they are in the "wrong body" cannot consist in adopting this belief themselves, but in questioning this belief, which, according to the "affirmative model," inevitably leads to harmful hormonal and surgical interventions. The English say to this: Someone has to be the adult in the room here. But this is precisely what Mr. Lempp obviously refuses to do.

We have to understand that "trans" is an invention brought forth by medical professionals. This does not mean that children and young people do not believe that the label "trans" actually describes their feelings and experiences. It is still an invention. And that's why it doesn't make sense to talk about "trans people." Because what exactly is that supposed to be? I imagine three possibilities here as an answer. Either it describes a symptomatology, in the sense of gender dysphoria, that is, suffering from the sexed body. Then I don't want to reduce these people to this suffering. They remain girls and boys, men and women, despite the suffering, and are more than their symptoms. After all, we don't say "depression people," "anxiety people," or "schizophrenia people" either. Or is Mr. Lempp referring to an identity? If we look at it more closely, however, it is an identity that, first, is based on traditional sex stereotypes, second, is linked to medicalization, and third, normalizes dissociation (detachment from one's own body). All of which is nothing desirable to applaud.

We must also understand that behind the trans agenda is the industrial medical complex (IMK) with increasing profit margins of unimaginable proportions. Doctors like Mr. Lempp are actually sex role doctors. They diagnose sex roles and help solidify sex roles with their interventions. We will see in a few years that this gender medicine is one of the biggest medical scandals in history. Nothing anyone could be proud of having played a part in.

Argentina - the first country to legalise abortion without women - click the link to read this article by Maria Binetti (January, 2021).

Open letter to German politicians, written by women's rights activists. The letter argues against the inclusion of the term 'gender identity' in the ban for conversion therapy. The "law for the protection from conversion therapy" has passed the German parliament in May 2020.